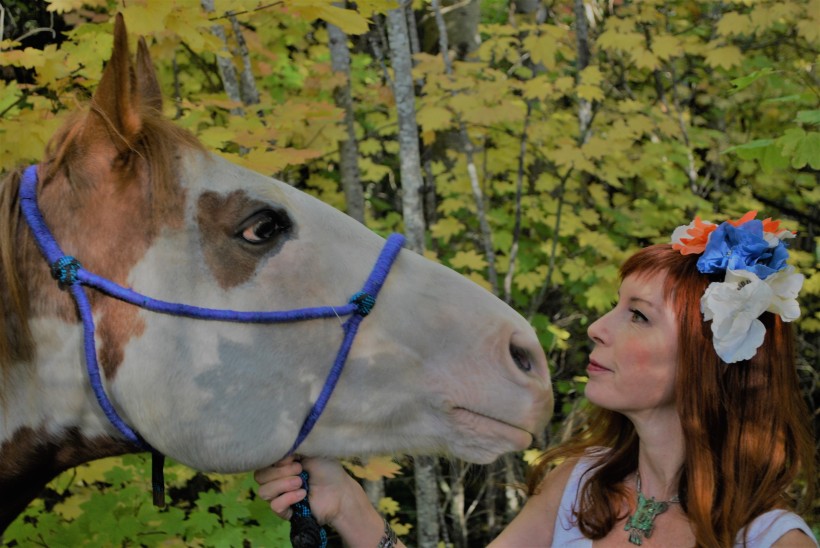 I went to see the medium Thomas John. I half expected none of my dead relatives to show since most of my living relatives don’t have anything to say to me….

For a while now I have wanted to do a Frida Kahlo inspired portrait. She had her birds and monkeys and I have my horses. There is something about the way she looks in her self portraits that I can relate to. The are so solemn yet there is a magical sparkle to her eye. Being immersed in teaching art and art history this year has pressed me to improve my skills and experiment with new projects.

A new year at a new school means new students. New students give me an opportunity to tune into a bottomless well of joy, excitement and sometimes pain and sorrow. Being an empath and an intuitive person seems to shine a bright beacon of light pouring like a searchlight for those who are lost. I often have adults seek me out to tell me secrets, dreams and wishes after only knowing them a few minutes. After a class, in a parking lot, out for a drink with my husband, in a horse stall or wherever I happen to be with my “VACANCY” sign lit in red, they find me. With children, their emotions are so raw, I can see a slump of shoulders, a glassy eye or a tight jaw and know that someone has something on their mind outside of not liking how their drawing is going. I can’t ignore these signs so I settle in next to them. Sometimes it’s a little thing, frustration with a sibling or someone on the playground. Sometimes it’s a big thing that almost knocks me down with its weight. Some of the things that kids have to see, go through, and worry about weigh more than their adult bodies ever will. Their shoulders are far too narrow to carry such sorrow so I tend to take a turn at carrying part of the load.

By Thursday last week, I could barely stand under the weight of it. Three sets of heartbreaking news told by children was dense with sorrow. I wondered what could help me and realized when the house was quiet that some yoga could be of use. As my body led me through a sequence of its desire, my heart opened and let go of anything that wasn’t mine as a tear ran down my cheek. On my way to pick up my kids from their dads, I sang loudly to Mountain Sound and Rivers and Roads and by the time I got there, I was good.

Over the weekend, I went to see a medium named Thomas John. My friend Cindy had loaned me his book, Never Argue with a Dead Person. When he was coming to Seattle, she invited me to join her for a small group reading. I felt anxious that maybe none of my dead people would show up. Most of my living relatives don’t want to talk to me so I wondered if it was the same with those that had passed. I really had one person in mind that I wanted to hear from, my grandmother Irene. I always felt that she truly understood me and loved me not despite who I was but because of it. I could tell her anything and she never judged. She let me make mistakes, of which I made many, but stayed by my side even when nobody else could comprehend my choices. I miss her earthly presence but I often feel her near me and know she’s been along on my best adventures rooting for me.

During the group meeting I watched others go through a host of emotions. Some laughed at the familiarity of their loved ones humor as a deceased mother joked, “Everything was great until your father showed up, then things got LOUD.” I waited with my usual low expectations. Then it happened, a horse from my past showed up and then my grandmother. The medium connected and asked, “Did you storm out of a job?” I replied, “Many times.” “There was a big job change, yes? What I am hearing is clapping. Had you stayed at the other place, you would have gotten very sick and died.  Do you know this?” When I took the job at Discovery Lab almost two years ago, I was letting go of Gildenfire which is something I loved and built and nurtured for so many years. When I was making the decision, I had been suffering from mysterious and crushing fatigue, weight loss, hair loss, paleness, and episodes of feeling fearful of simple tasks like walking down a snowy hill. Just to know that I was guided in that decision and listened and saved myself was a huge validation of my knowing. He reiterated several times, that I was very intuitive, and open to guidance and have been guided to the place I now reside.

Seeing this medium helped me to see the answers that I already knew but could scarcely believe. I know that I am in the right place doing what I am supposed to be doing. I know that the family I have, the boys and Neil, is by no coincidence. I know that Endeavor found me and helped me find my way home. Once I was home, as I am now in Cle Elum, I found Inez and became part of her story.  Her story is so sad and dire.  She came to the orphanage with just one other foal, the rest of her herd bound for the slaughter.   She came at just the right moment to remind me of the importance of patience, unconditional love, hard work, perseverance and never letting anyone tame you to the point you no longer recognize yourself.  Hers is a story of total loss then rebuilding and learning to love and trust again.

These horses never give me a day off. At the minimum it’s feeding and watering and cleaning paddocks. I hate when there’s only time for that but so it goes. Friday nights we sit by the fire (the burn ban is finally lifted) out by the horses and retell the stories of our week. We applaud the wins and learn from the losses. The sameness of the manure scooping is like a meditation. Much like the Zen saying, “Before Enlightenment, chop wood and carry water, after Enlightenment, chop wood and carry water.”

In the swift turn of the season from harsh everlasting winter to dry hot summer so to has my life changed.  Just weeks ago my weekday mornings were spent at the Discovery Lab working with students on writing, math, weaving and science. My afternoons were often spent at the barn with my gelding Endy riding through the woods above the Teanaway River.  We rode through the winter in rain, deep snow and finally spring mud and wildflowers. 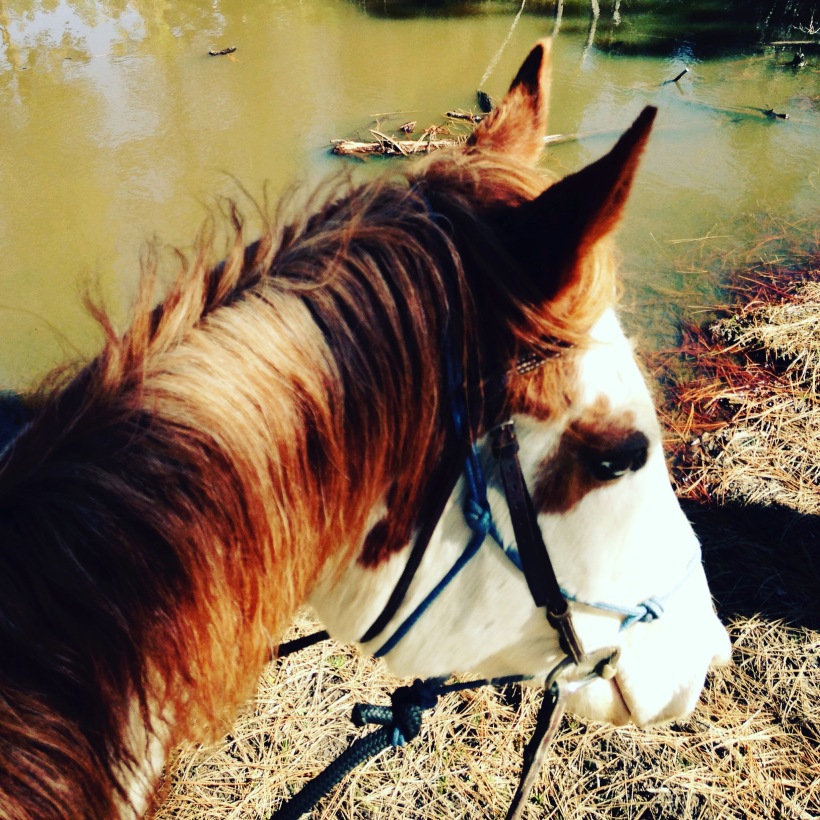 I visited with parents at the classroom each day, chatting about children’s progress and catching up on everyone’s busy spring lives.  I visited with the barn girls, a group of amazing, kind, interesting women who adore their horse time as much as I do.  I prepared for the end of the year and the goodbyes that were ahead.  I had decided months ago that I would retire from Discovery Lab when we lost our space at Thorp in the brick building at the end of the school year.

In a flash, the last few weeks of school and the goodbyes came and went.  My horse Endy got sick with strangles and our glorious rides through the woods were replaced with visits in a stall wearing a Tyvek suit and rubber gloves and bleaching myself as I left.  He is finally starting to feel better, which I can tell because he is furious about his situation.  He went from days of leisure in a herd in a pasture to solitary confinement.  There he will sit for another four weeks due to the contagiousness of his condition.  My identity has shifted in so many ways.  I applied for and was offered a job as the K-12 Art Teacher for Thorp Elementary and IGNITE (gifted) Program teacher.  It was a total long shot, I didn’t really think I would get the job but I knew I wouldn’t forgive myself if I didn’t apply.  So, this summer I dust off a few old hats and plan for a few new.  I am living as a novice horse trainer, working with Inez and Pippin an hour a day on sacking out, leading, round pen basics, bathing, ground manners, and preparations for riding, though for Inez that is a few years off.  I finally got a garden in with strawberries, raspberries, pumpkins, sunflowers and herbs.  I have been studying for my Teacher Preparation Exams because I am now working towards my teaching certificate and hope to apply to Central this fall.  I am meeting with a mentor who teaches a similar art program in Seattle as I work to design the new art curriculum, taking classes and trying to make art everyday.

With all that change, one thing stays the same and that is family.  My boys and Neil are the center of my universe and the choices I make affect all of us.  Without their love and encouragement and blind faith in my intuition, I would not be leading the amazing life that I lead.  Then, there’s Inez.  She has been here almost a year and changed me profoundly.  As I watch her grow and change and work with her, she makes me feel like with enough persistence, I can do anything.

What a blessing  it has been to watch her evolve into this happy, funny, affectionate, and smart yearling.  I can vividly remember almost a year ago when she barrelled into a fence as we tried to load her into the trailer at the orphanage  in a total panic.  Within a day, I had touched her.  Within a week I had haltered her.  She is still a wild girl at heart.  Sometimes she seems to “pretend” to be scared of some non-existent threat to tear around bucking and racing and jumping anything she can.  She loves her girl Pippin and spends their visits badgering her into mutual grooming and moments of play.  Those two keep me steady.  Everyday, I am out there, it doesn’t matter the weather, I made a commitment. 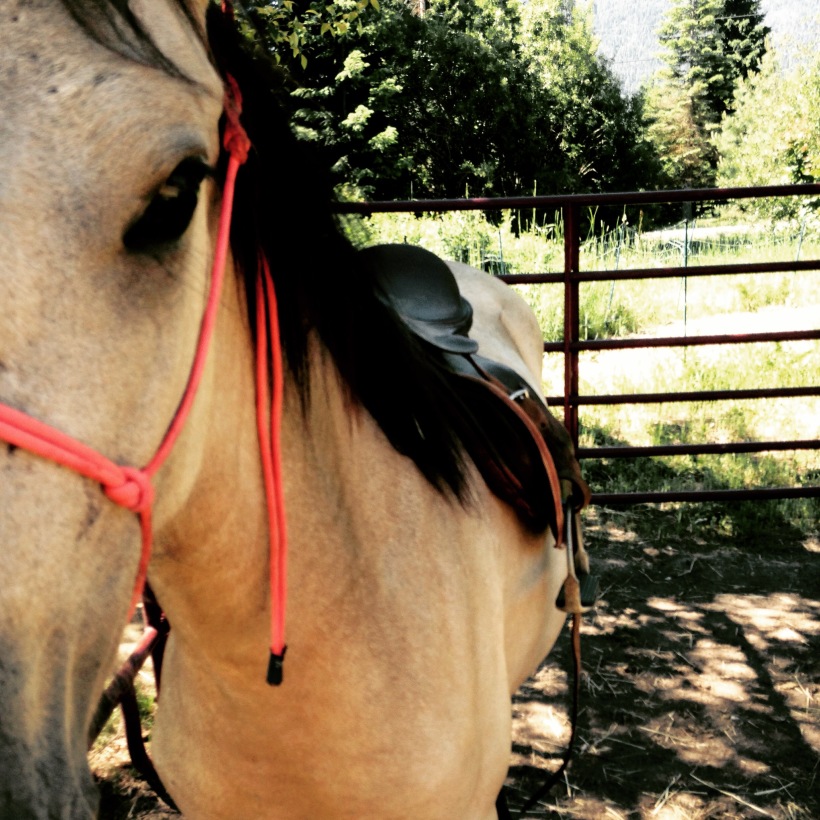 Pippin has changed too.  After a winter of viewing me with skepticism, I started working with her this spring.  She hasn’t been ridden in almost a year so we started back at the beginning.  Her aloofness faded with each lesson and she now follows me around leaning in for a selfie at every opportunity.  Her sweet owners said she can stay a while longer and I am grateful.  Endy will come home as soon as he is cleared of strangles and is well.  I can’t wait to see him every morning when I wake up and say goodnight in the dark each evening.

My wise friend and leader of Discovery Lab often reminds me that “Everything is unfolding as it should.”  I will never be one to settle.  I want to spend my life growing, changing and swallowing up every possibility that I can imagine.